The former Portage Indian Residential School is now home to the National Indigenous Residential School Museum of Canada Inc.  It is located along the boundary of the City of Portage la Prairie centrally located in the province of Manitoba and Canada.  On August 14th, 1981, Long Plain First Nation was granted 45 acres of Federal Crown land that was request in May 1981.  This surplus crown land was acquired as part of their outstanding treaty land entitlement.   The former Indian Residential School building and the land surround the building is property of the Long Plain First Nation. It is located at the Keeshkeemaquah village, one of the three Long Plain lands. 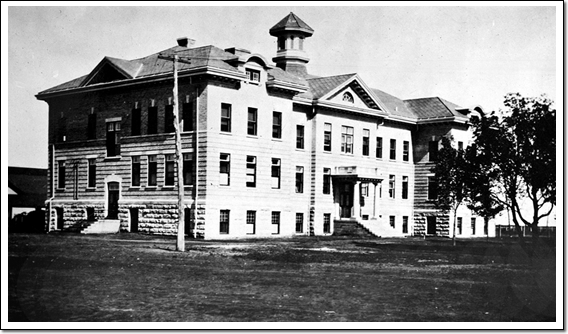 The lots of land, Parish Lot 50, 51 and 52 were purchased by the Department of Indian Affairs in 1913.   Construction of the residential school building began in 1914 and completed by 1915 to accommodate the first student and staff by 1915. By 1919, an additional 47 hectares (116 acres) was bought to be used as farm land. In 1961, the school was converted to a student residence only. Again in 1965 major renovations took place and the school was called the “Portage Indian School Residence.”  It was also known as “Portage La Prairie Boarding School” and later changed by the Long Plain First Nation as the “Rufus Prince Building”. The building was renamed in honor of Rufus Prince, a former Portage Indian Residential School survivor and a World War II veteran.  He dedicated his life to the Indigenous community as a former Chief of Long Plain, a Treaty rights advocate, former vice-president of the Manitoba Indian Brotherhood, as a founding member of the Dakota Ojibway Tribal Council and the Dakota Ojibway Police Force.

The former residential school was managed by the United Church and funded by the Department of Indian Affairs.  Although the children acquired knowledge and skills to adapt in the changing environment, the assimilation policy of the government was ongoing that eliminated all aspects of their culture, forbidden to speak their language and disruptions and alienation from families and familiar surroundings. “A broken trust resulted from the misuse of education as a tool of assimilation by the Canada, with significant, long-lasting impacts that continue to be experienced in Canada today……resulted in large-scale mistreatment of Indigenous children and the schools failed to deliver what Indigenous Peoples expected of them.” (JR Millar Residential Schools and Reconciliation: Canada Confronts its History (Toronto: University of Toronto Press, 2017) 14-15

By the late 1950s, the government’s policy changed to integrate Indigenous children into the public school system.

The school remained open until 1975.

In 2005, the building was designated as a Provincial Heritage Site.  In April 2018, it gained charity status and has a Board of Directors.

The building holds a substantial amount of history and experiences that have become an invaluable part of Canada’s history and heritage that needs to be preserved.  Children from Long Plain First Nation, as well as students from northern communities and Inuit children attended this residential school.  The effects and its impact still affect present day Indigenous culture and lives of Indigenous peoples, their families and communities.

Your ticket for the: History